The Beauty of Bryce Canyon

Hoodoos are what they call the strange and fanciful rock formations that make Bryce Canyon National Park one of our most beautiful and photogenic places in the Southwest. Spires of reddish orange, pink, and white rock with names like Queen Victoria, Thor’s Hammer, Silent City, Fairyland and Wall Street allowed my imagination to take over as I viewed the unusual totem pole-like formations that the erosion by water and ice have created.

There are formations called hoodoos all over the Southwest but nowhere are they as plentiful as in the northern section of Bryce Canyon National Park. The tallest are several stories high while others are only as high as a person. Bryce is not like any other canyon in the Southwest. It is more a long ridgeline that stretches along the Paunsaugunt Plateau. An eighteen-mile scenic drive with thirteen different viewpoints allowed me to absorb the beauty of these natural sculptures.

The type of rock is a major factor in the formation of the of hoodoos. The ones at Bryce Canyon are shaped from the stones of the Claron Formation. Limestone, siltstone, dolomite, and mudstone all are present in the Claron Formation. Each rock type erodes at different rates. Each type’s resistance to erosion is what causes the interesting shapes and contours of the hoodoos.

Driving the park road allows you to choose where and when you wish to stop and watch the sun paint the hoodoos with light. They will change color as the sun rises in the sky until it descends below the horizon at sunset. The viewpoints mostly face toward the east so sunrise is a prime time to exercise your shutter finger. Winter brings the white blanket of snow to the colorful stone towers. Most people visit in the summer but spring, fall, and winter all have their own appeal. Luckily, Bryce only gets about a third of the visitors as the Grand Canyon and about half of what the closer Zion National Park receives.

The Paiute people have a legend that says the hoodoos are the evil “Legend” creatures who were turned into rock by the Coyote Spirit for their misdeeds. The Paiute call Bryce Canyon the place of “Red Painted Faces.”  I hiked into the canyon along the Queens Garden trail and later the Navajo Loop trail. I could almost see the faces of these ancient criminals in the formations.

The aptly named Sunrise point is one of the first places that I made holes with my tripod. This is the starting point of the trail to visit Queen Victoria who has been ruling over the Queen’s Garden for centuries. A short walk along the Rim Tail brought me to Sunset Point where Thor’s Hammer glowed red in the late afternoon light. The Silent City is another formation that is enhanced as the shadows get longer. Another mile further on is my favorite view in the park for sunrise.

Inspiration Point allows you to see the whole amphitheater of Bryce Canyon. I felt like I was among a huge crowd of stone spectators waiting for a theatrical show called “Sunrise” to start. You can look north and see the silent city and Sunset Point while to the south is Bryce Point at the other end of the amphitheater. I set up my camera to try to capture an image of the rocky crowd before they decided to leave.

The group of viewpoints in the north end of the park are the most photogenic and you can spend hours working on vast landscape images or more detailed close ups of the numerous hoodoos. I forced myself to drive onward to see Bryce Canyon’s famous stone arch which is misnamed the “Natural Bridge”.  I finished my adventure with the views at Yovimpa and Rainbow Viewpoints at the end of the road. Many visitors drive here first and work their way back to Sunset Point for the end of their day, so they are closer to the lodge at nightfall. It is thirty-six miles round trip.

If you have more than one day at Bryce Canyon, make sure you go out after the sun sets and it gets dark to stargaze. Bryce Canyon National Park is an international dark sky park. This means there is less light pollution so you can see all the way to the Andromeda Galaxy with a good set of binoculars or a long telephoto lens. The Milky Way can be seen from late spring all the way to October. It is more horizontal in the spring and moves slowly into a vertical column by fall. Imagine the hoodoos under a canopy of stars. Bewitching.

As I returned to the lodge for my final night at Bryce, I thought about the Mormon pioneers who settled here in the 1850s. Ebenezer Bryce, for whom the park was named, only stayed here a few years. He is credited with the famous quote about Bryce Canyon, “Helluva Place to Lose a Cow!” My walk among the hoodoos leaves me in no doubt that I would not want to try to find a lost Hereford among the myriad of twists and turns of this natural maze that is Bryce Canyon National Park.

Arizona Highways PhotoScapes goes to Bryce Canyon twice in 2022. Once is in January for three days of hopefully snow-covered hoodoos. The white snow against the red, orange, and pink colors of the hoodoos would make for great images. Leroy DeJolie is a great instructor for this workshop. Another workshop starts in September for four days and focuses on the night sky over the eerie formations. The Milky Way will compete with the hoodoos to be the stars of your images. Beth Ruggiero York is an expert on night photography and knows Bryce Canyon well. 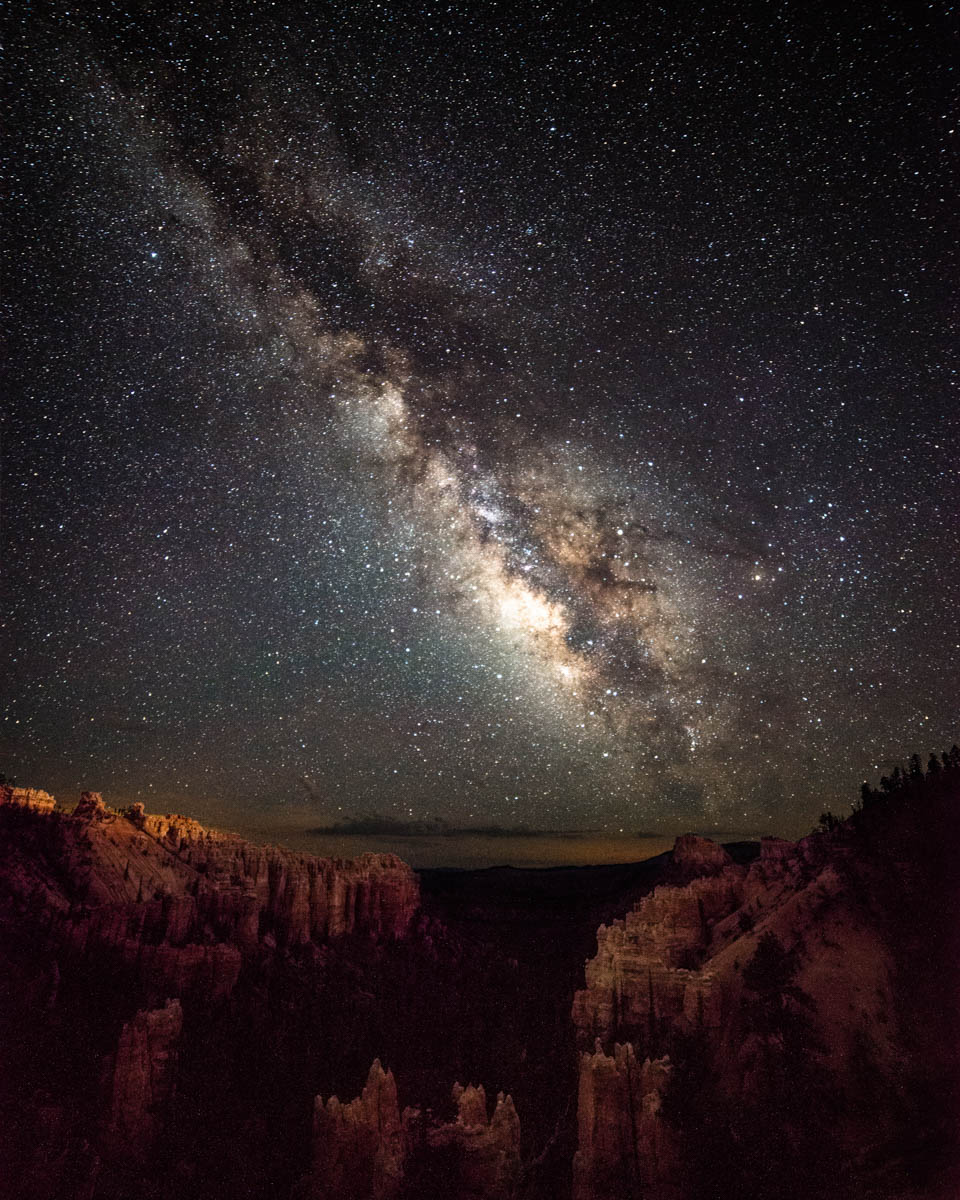 Jim Chamberlain is a Photo Guide with Arizona Highways PhotoScapes