How to illustrate a story for an automobile magazine 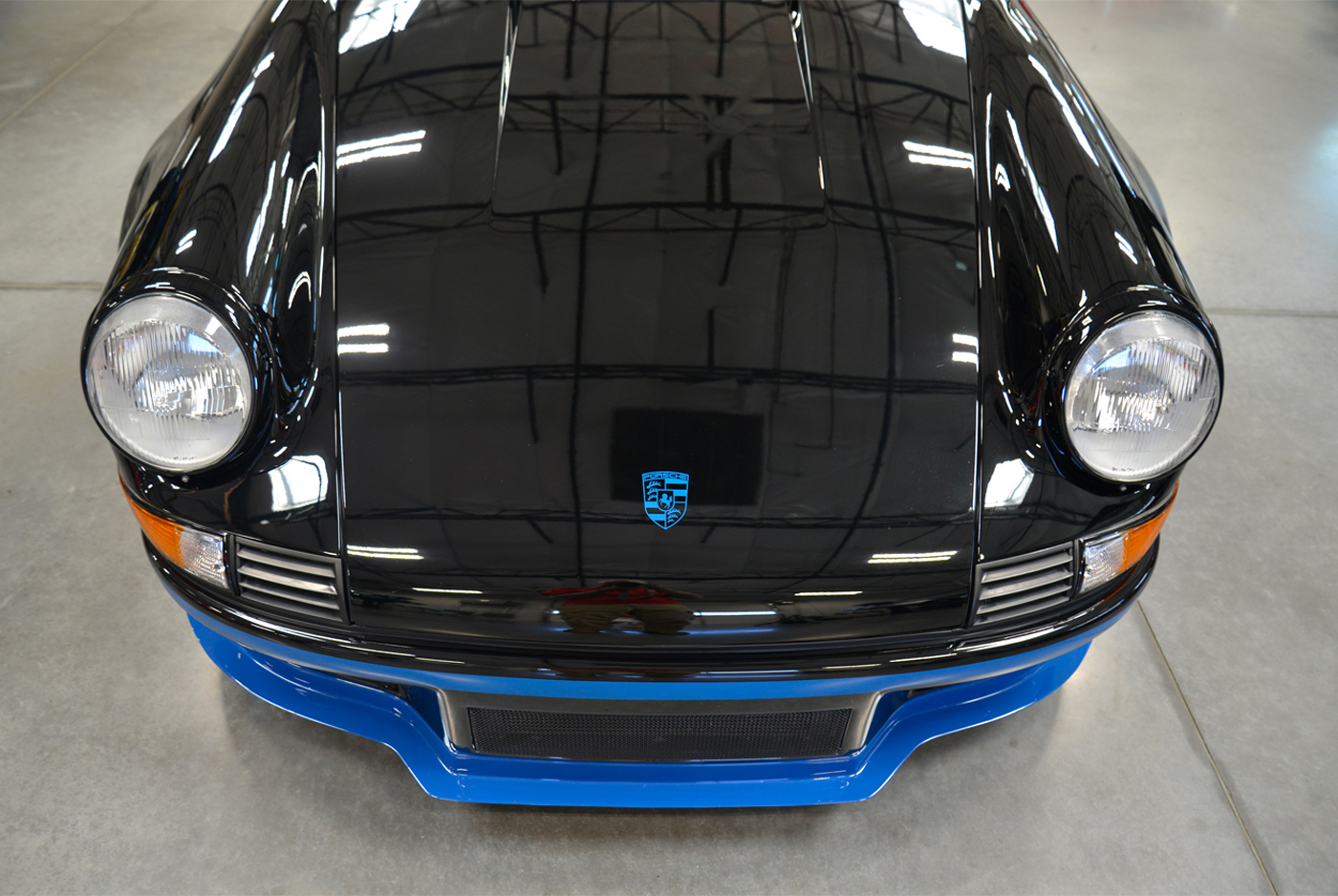 Last September I received an email from Peter Linsky saying he was writing a story about a 911 RSR Porsche in Phoenix. Would I be interested in photographing it?   Oh yeah, hell yes. My camera batteries were fully charged and ready to go!

Several years ago I had photographed a Porsche story for him.  It was about an unusual Porsche in Tucson. It was a 1982 911 935 Turbo with a rare German Evex body. The image ran double page in Excellence: The Magazine About Porsche. Later it won first place in a national Porsche photo contest.

I placed the Evex so that the yellow-purple line hit the end of the windshield. The low slightly tilted angle led to emphasis on the front and kept the vertical lines straight.

Peter had spotted an outstanding and different 911 at the Porsche 2019 Werks Reunion in California. He had watched an intensely black, retro ’86 911 RSR with blue accents win the Michelin Sponsors Choice Award.

I asked my friends Barb and Vern West from Gilbert, AZ to shoot with me. I had worked with them for many years. We were all Trip Leaders for Arizona Highways PhotoScapes.

So first of all we did a scouting trip to meet the owner, James Patrick lll of Patrick Motorsports, and check out the reconstructed 1986 911 Turbo RSR. 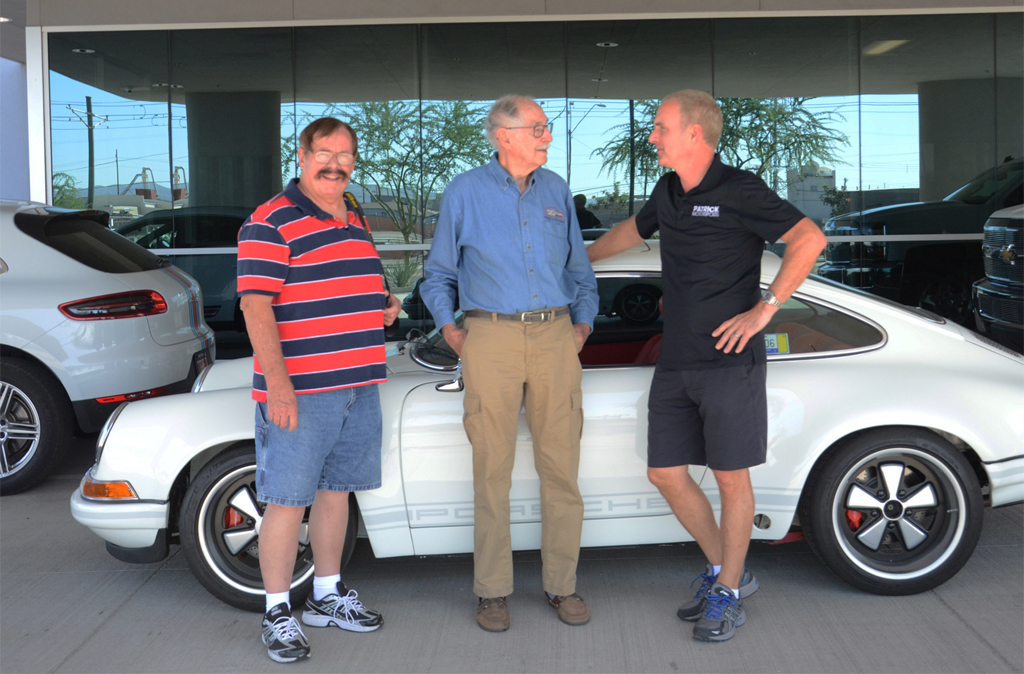 James is the owner and enthusiast behind Patrick Motorsports in Phoenix. He is a Phoenix native with a business degree from the U of A and a fine arts degree from ASU. He opened his business in 1989 and basically limits the garage to air-cooled models. He is widely known for his restorations and ability to do everything in-house. He has sections for metal work, engine construction, upholstery, paint shop and a complete machine shop to fabricate his own parts. The place is immaculately clean to the point you could eat off of the floor.

James put together his dream car, starting with a partially restored 1986 Carrera 3.2 liter from a New Jersey body shop. He ended up with a retro look 1973 long hood, wide body turbocharged RSR clone with as many tricks as he could come up with.

After modifications, including the turbocharging, the engine dynoed at 520 horsepower at 6,600 rpm. All body parts were strengthened to handle the power including the suspension and brakes.

The intensely deep black paint has a hint of Navy Blue. It is offset by the Regatta Blue leather that covers most of the interior. The form fitting seats are done in the Clan Guthrie Tartan pattern. Patrick gives full credit to his in-house upholstery shop.

In any automotive article describing a particular car there are images that are almost de rigueur. The next time you peruse such a story look for the following:  the first page should be a zinger; and then mandatory views of side, left front three quarter, and back. Look for different angles such as low, high, wide, and with different lighting. There is always a view of the dash board and the engine compartment and often the seats. There must be shots of small details such as side mirrors, handles, rims, etc.  Almost always there is the well composed shot of the vehicle zooming down a picturesque road. 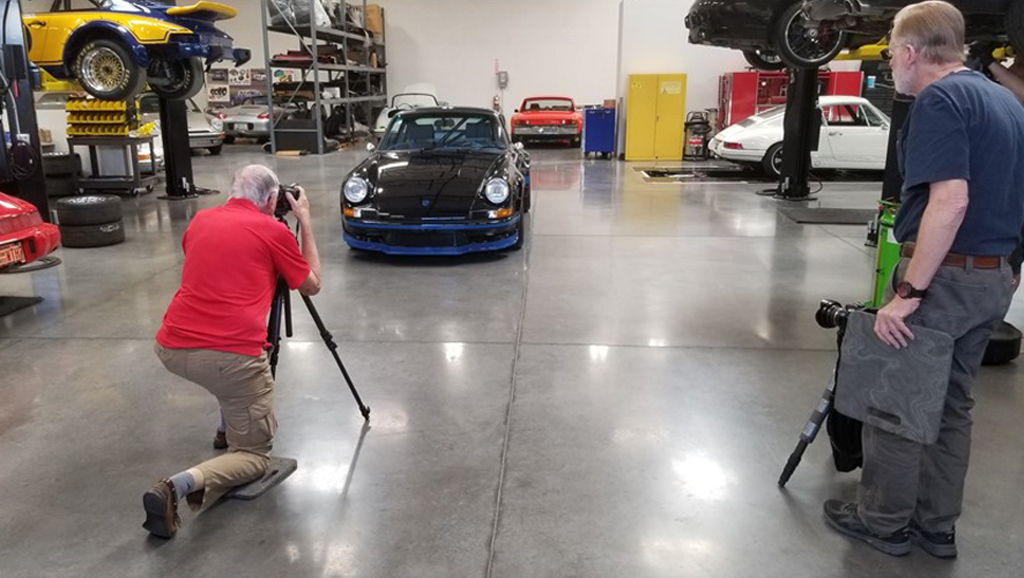 Vern West brings out the kneeling pads for low angle shots. The Motorsports garage was spic and span with bright, even lighting, leading to brilliant, colorful images. James and his crew were very helpful when we wanted to shoot different areas and angles.

Here are five of the seven images from the August 2020 issue of Excellence.

These are three of the images used in the article. I shot this angle from a ladder high enough to separate the red bumper from the black fender. 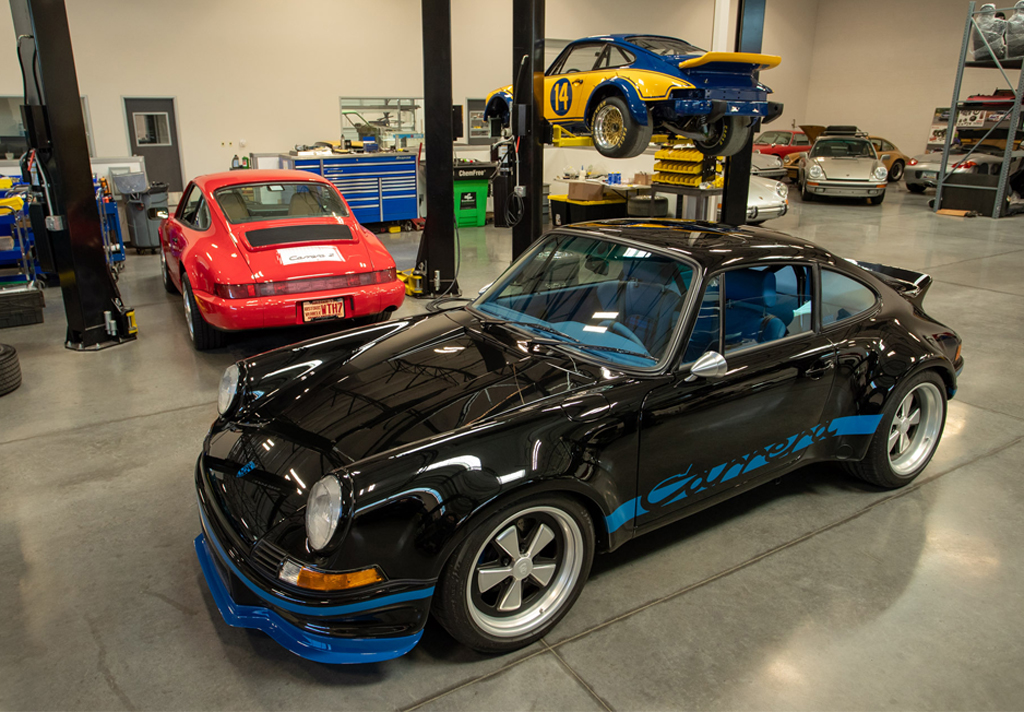 All in all, it was a fun and challenging time.  Getting the cover is almost like winning the lottery.