Fireworks—the story behind the shots

I missed the fireworks Saturday night July 2nd, and hemmed and hawed all day Monday July 4th, America’s Independence Day. I wanted to shoot some fireworks, but was not sure where to go, or if I really wanted to. I did and then I didn’t, then again… Finally, around 8:30pm I searched the web for fireworks near me and found Coon Rapids, MN would be displaying them at 10:00pm. The people would be many, the traffic heavy, and do I really want to go through all that?

At 9:00pm I decided, yup, I am going. Loaded the car with tripod and camera bag and off I went. No issue getting to the venue until looking for parking—oh my, the parking lot was full and people were everywhere. Not sure why, but a block away on the main boulevard, there was a parking spot right there.

I grabbed my camera bag and tripod and headed to where the people were gathering. Not sure what direction the fireworks would be, I looked around and the people were all facing one direction—aha! There were large trees not far away and I thought the fireworks were going to be on the other side and hoped they would be high enough for some good shots. Looking for perhaps a better vantage point, I found an open parking lot with a few onlookers, but still with trees beyond. I set up my tripod and mounted a 40-150mm lens on my camera, because the fireworks were going to be some distance away.

The fireworks were non-stop for 30-40 minutes, no time to mess with settings and fortunately did not have to. I used a feature of the Olympus EM1 MKII called Live Composite—it starts by taking an initial image, then taking additional images and only adding new light from the additional images. In the case of fireworks, it takes the initial image of the first explosion, then each additional image it adds any new light from new explosions. If no new light/explosion, no light is added to the image. I can watch the monitor as it builds the image, and when I like what I see, I stop it and start a new one. I ended up with multiple explosions in each image.

Camera settings were 1 or 1.6 second shutter, and I usually waited 4-6 seconds before stopping and starting again, so each image was a composite of 4 to 6 explosions. Other settings were ISO 64 and aperture f/3.5 or f/6.3.

The image at the top of this blog was with a 40mm lens, too much for how close I was.

These next images were taken after changing the lens to a 12-40mm and shooting at 12mm. 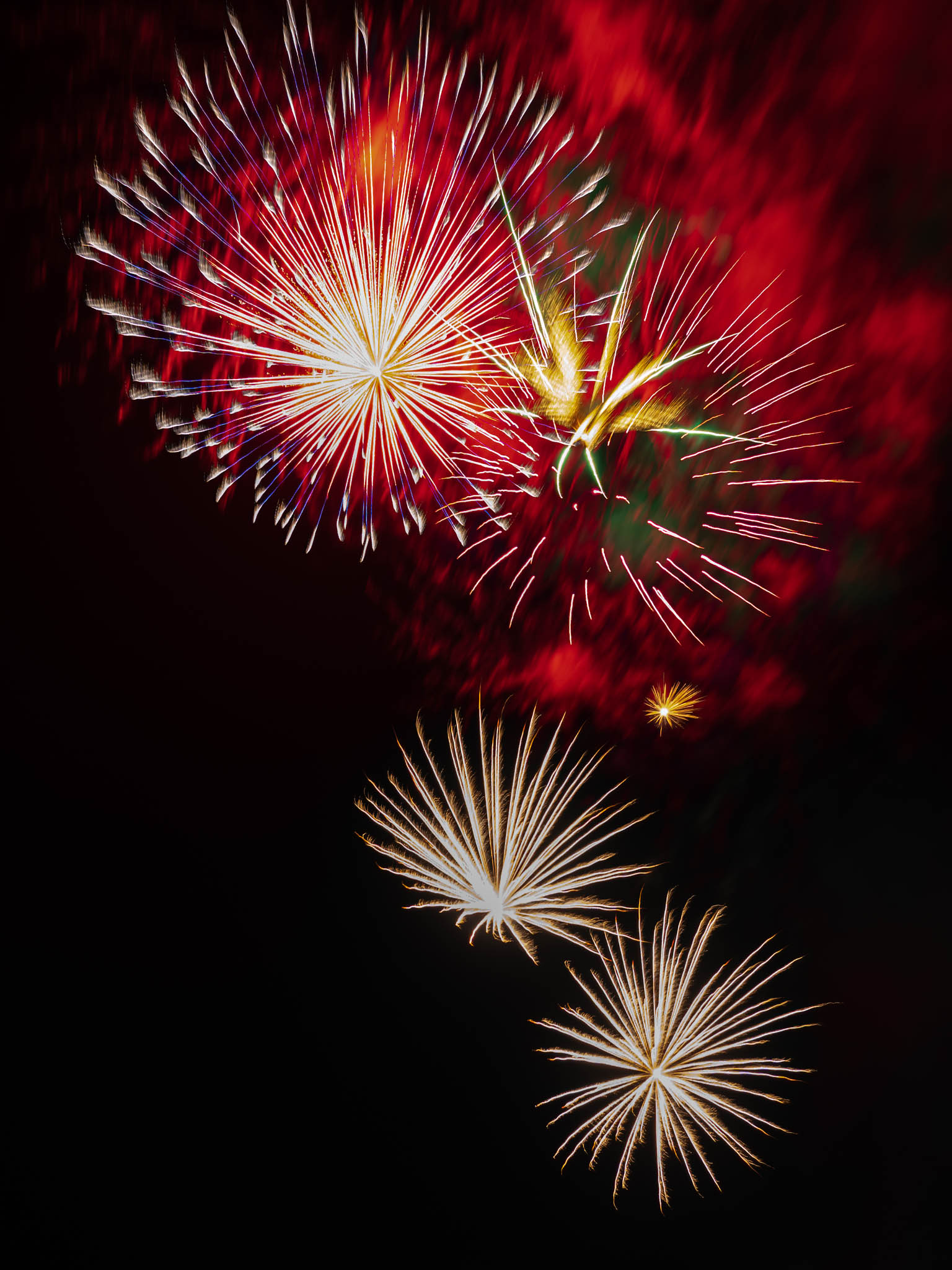 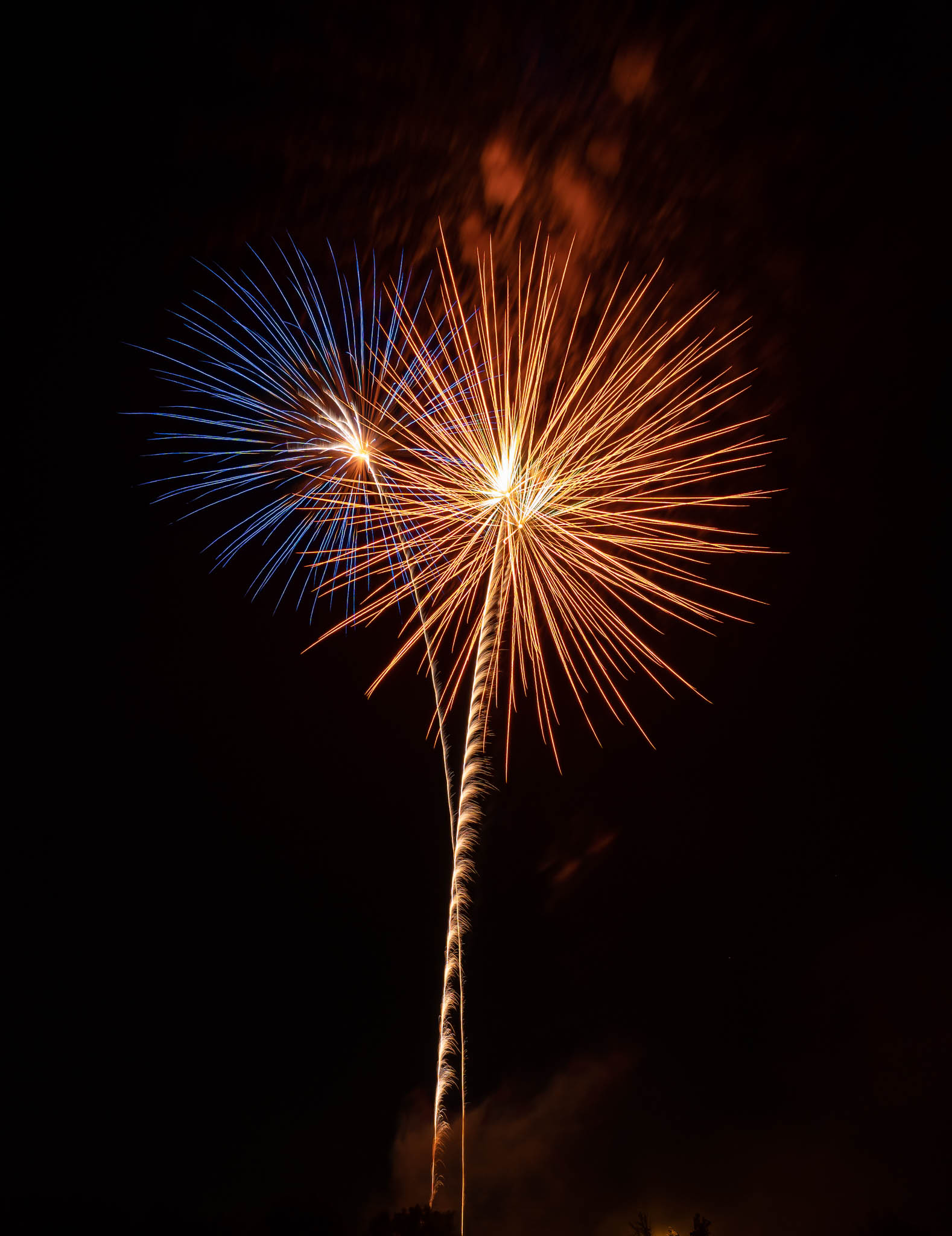 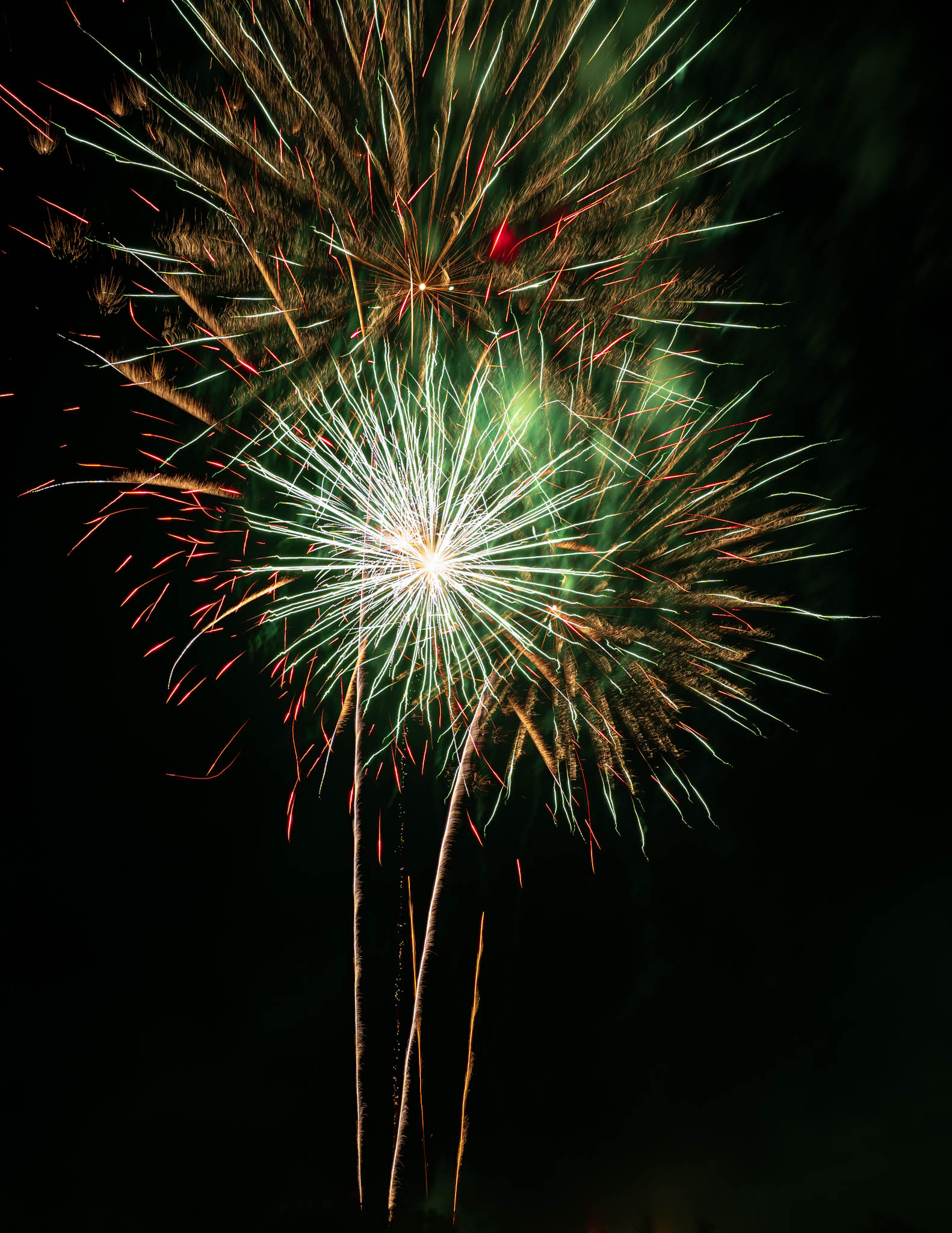 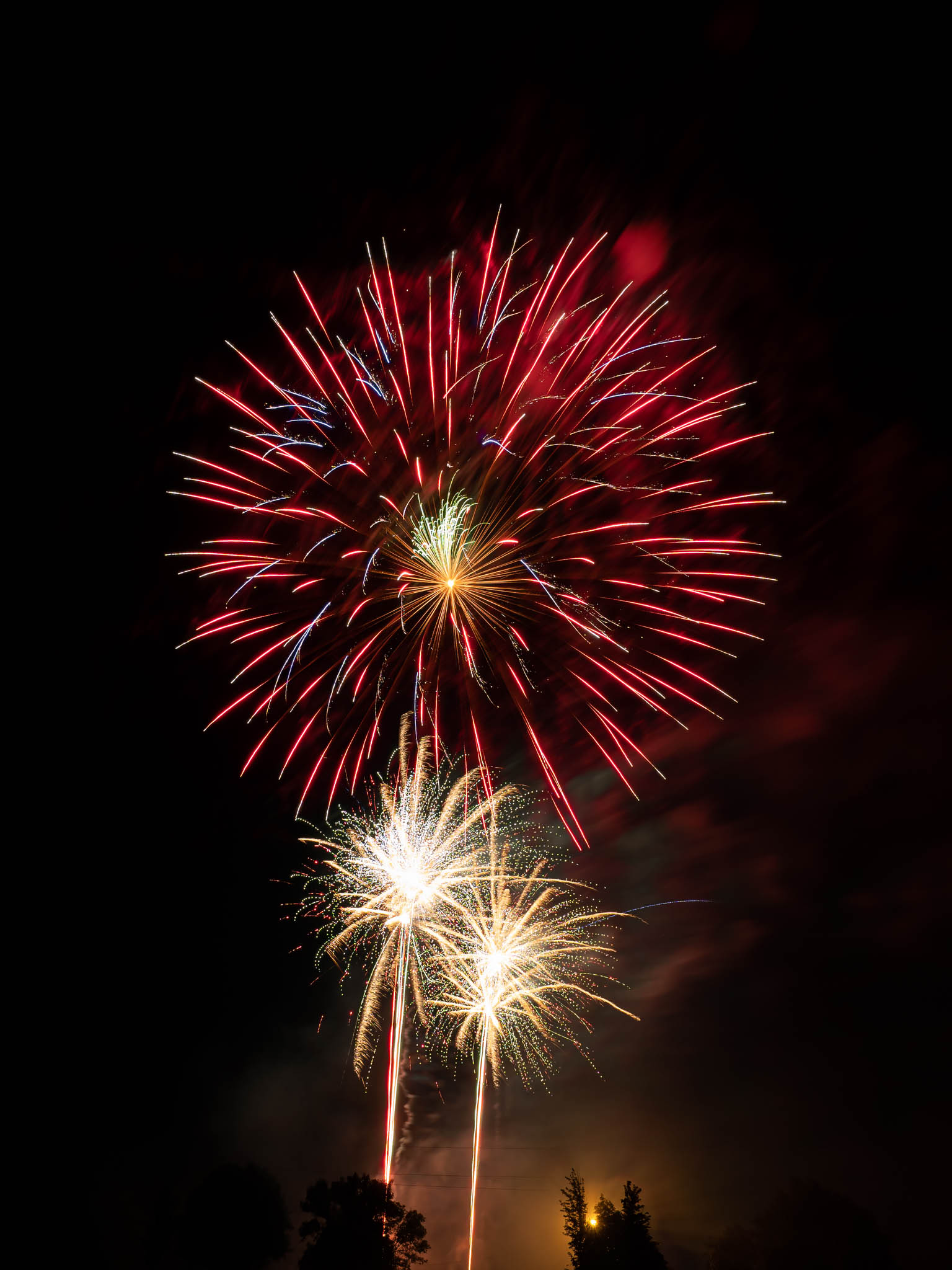 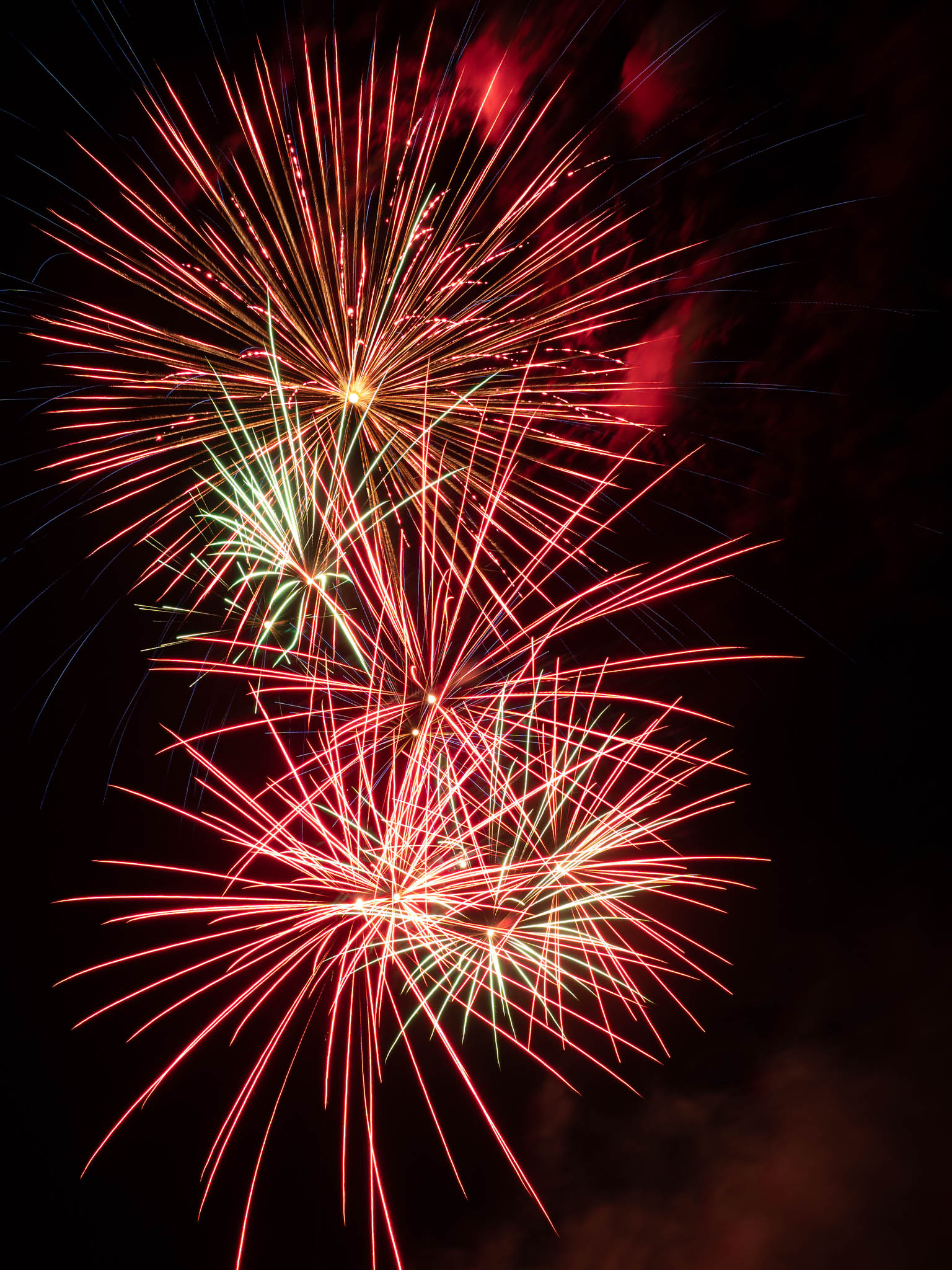 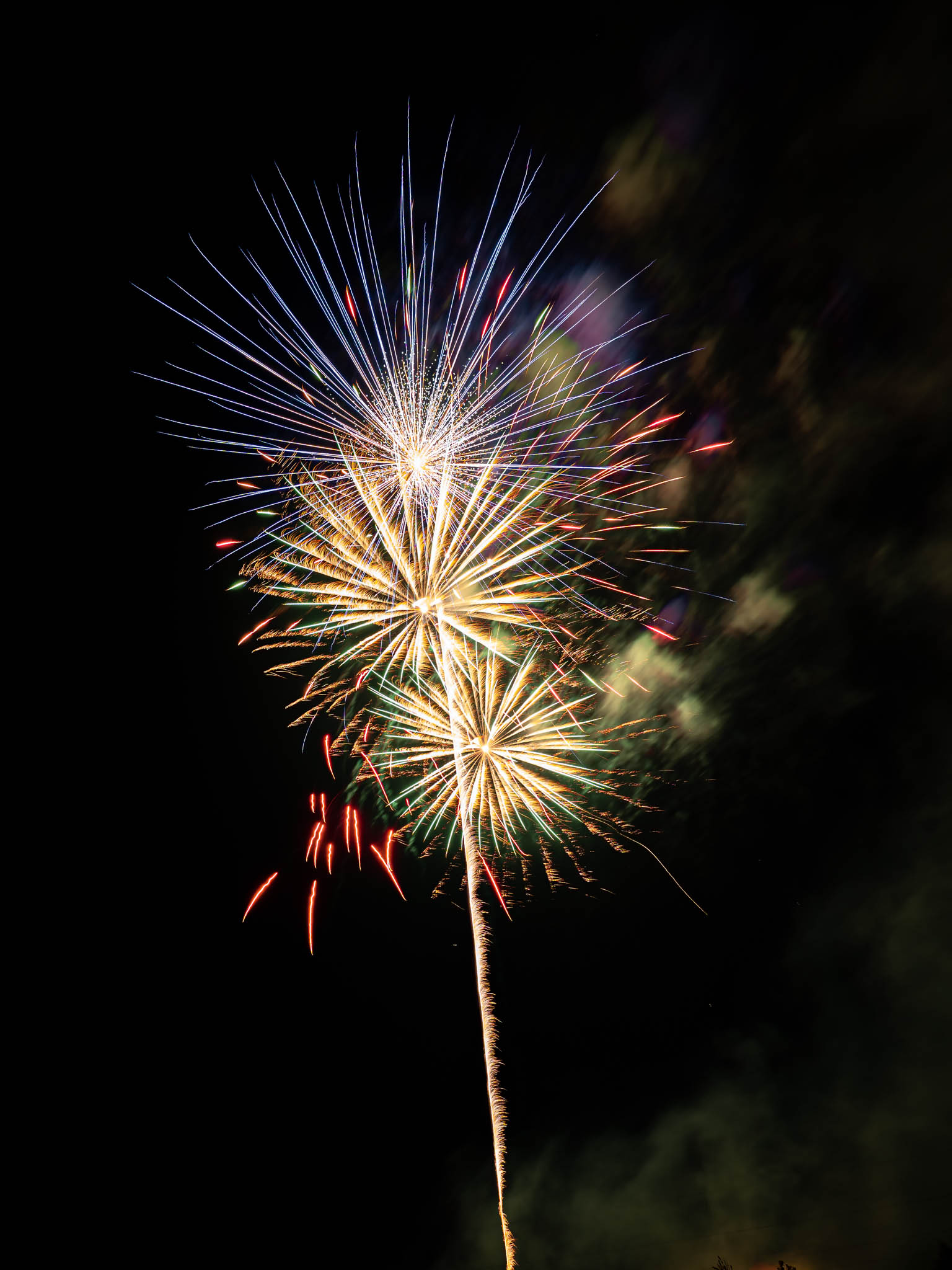 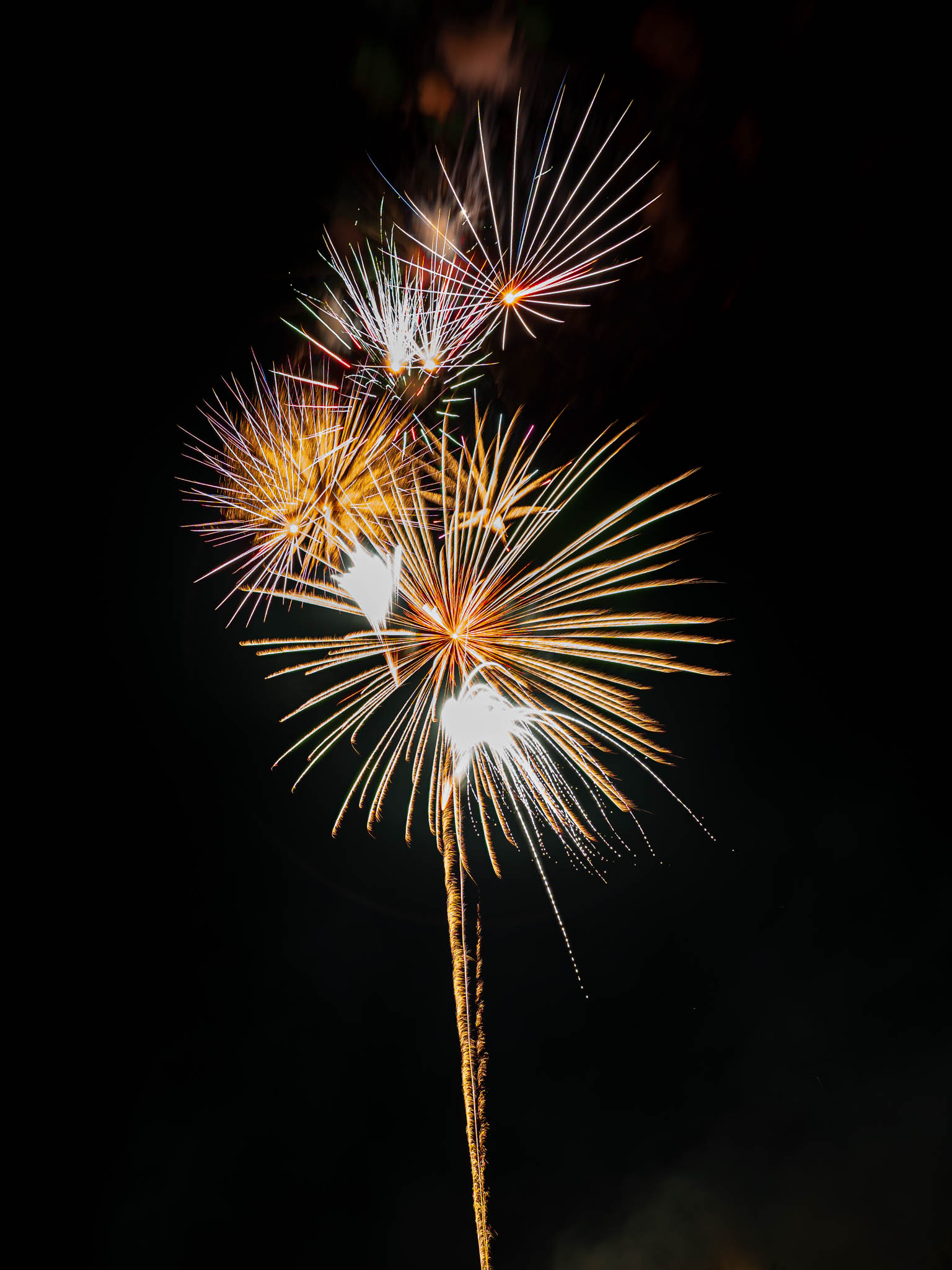 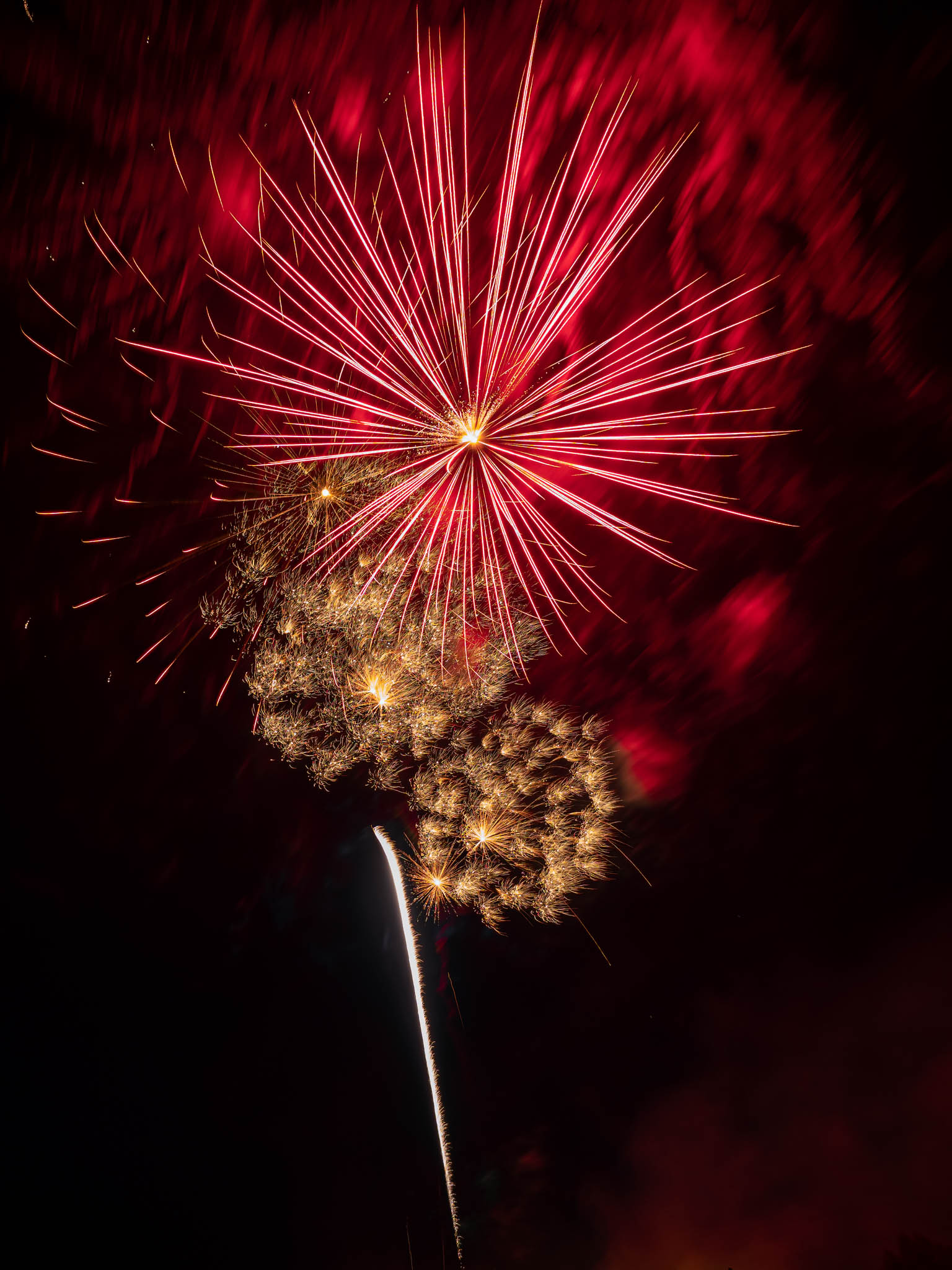 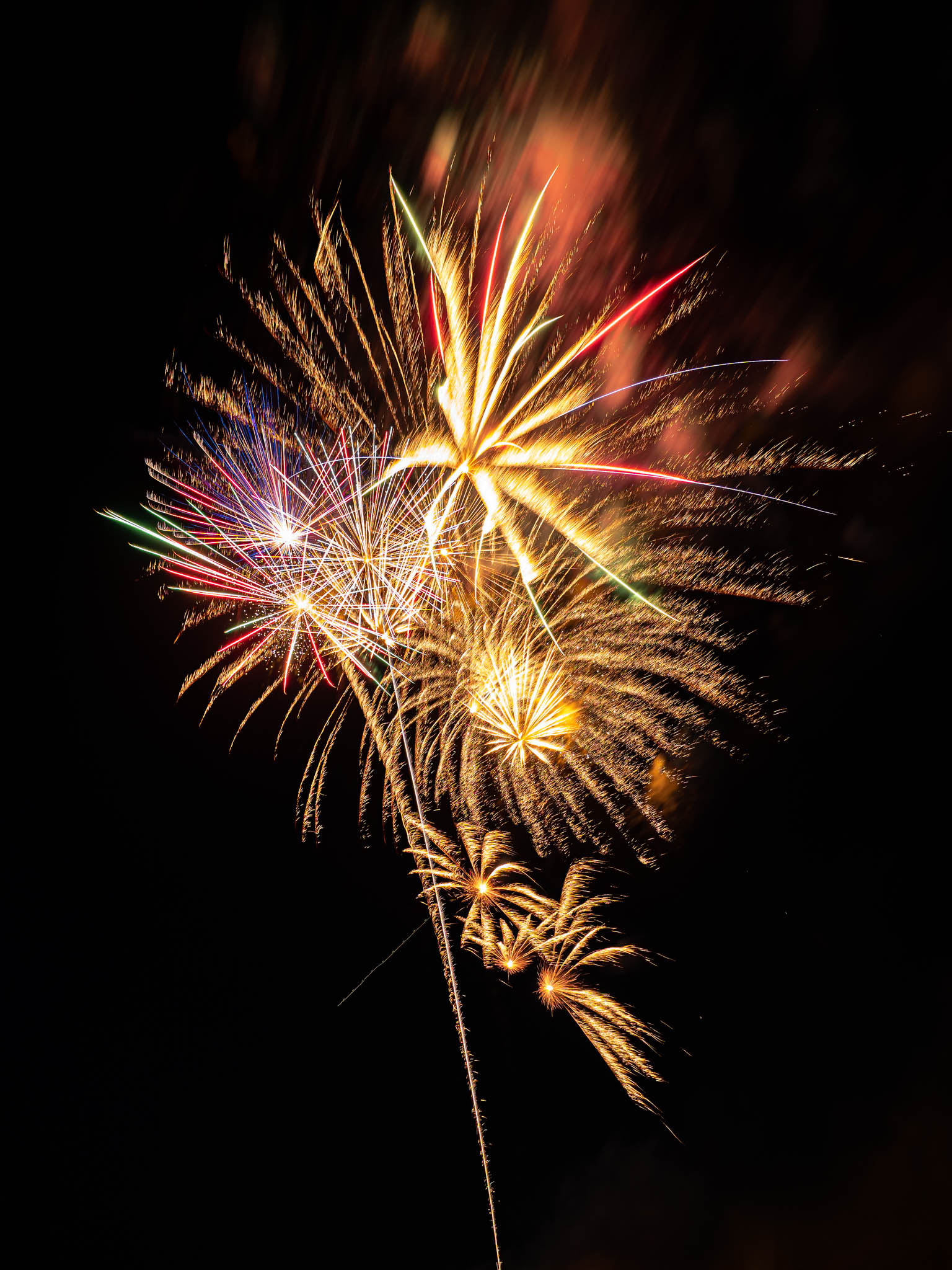 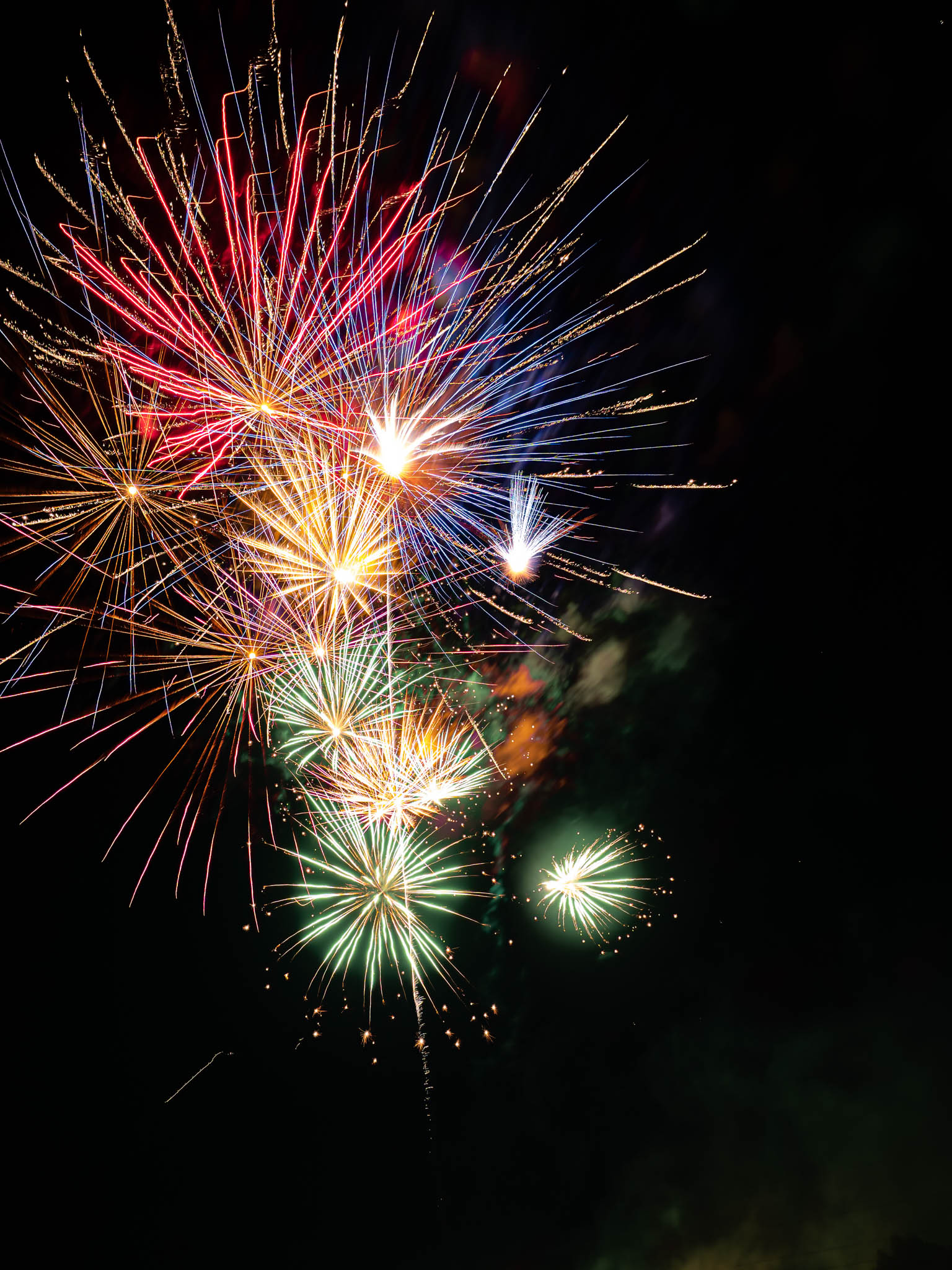 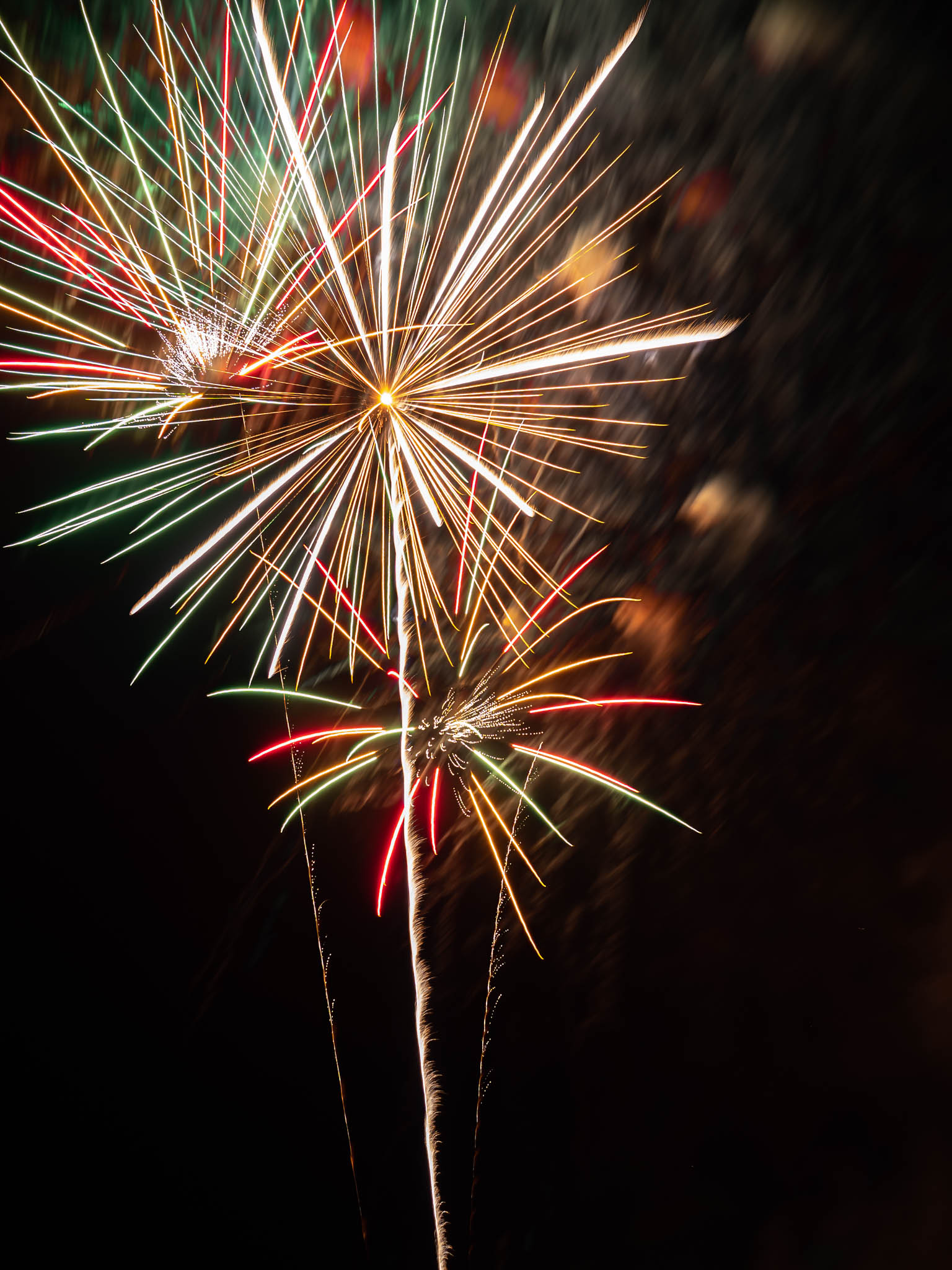 The finale was quite spectacular with multiple explosions all at once. It was a little difficult to shoot as they were very bright, but did get a couple. 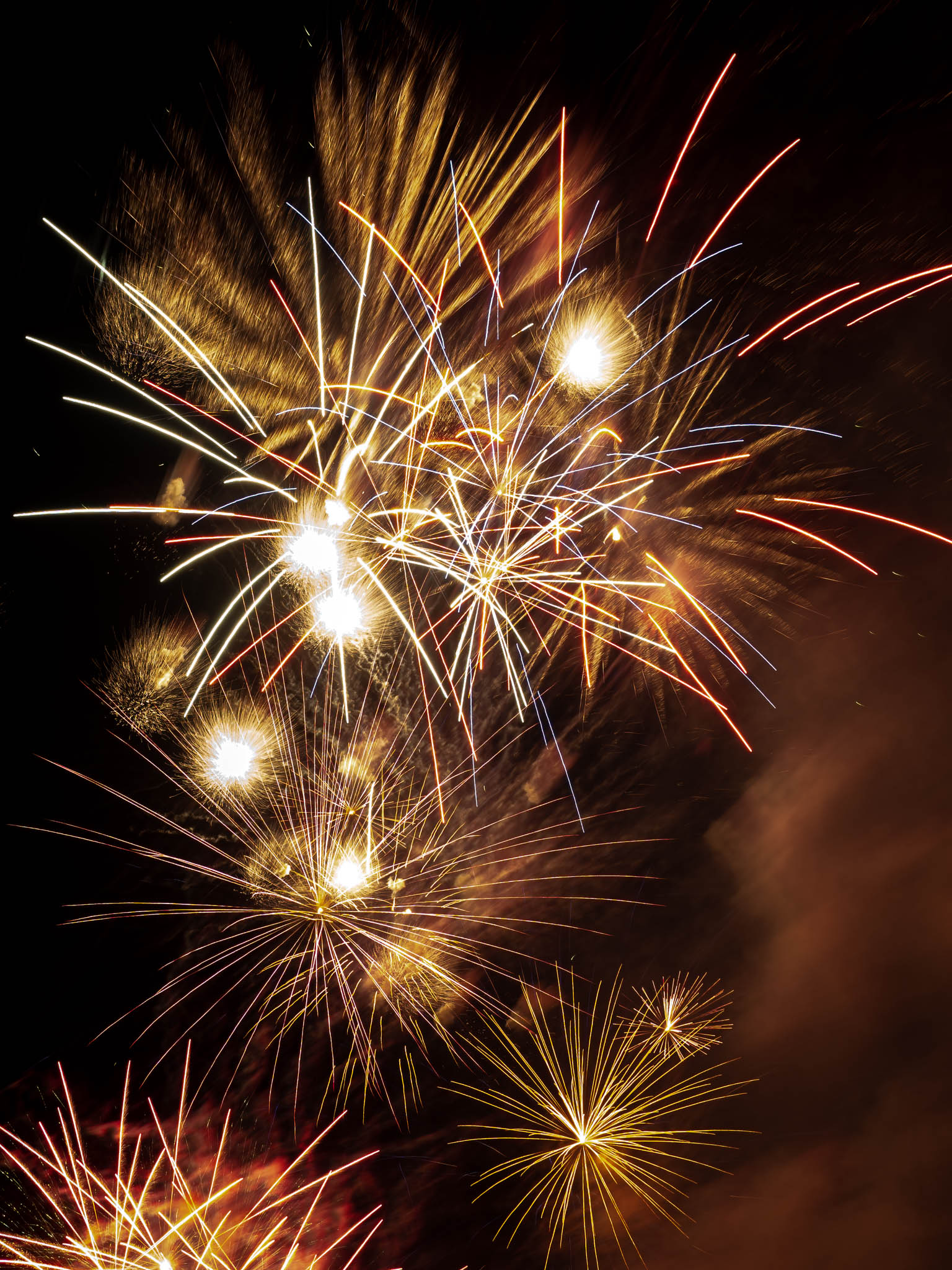 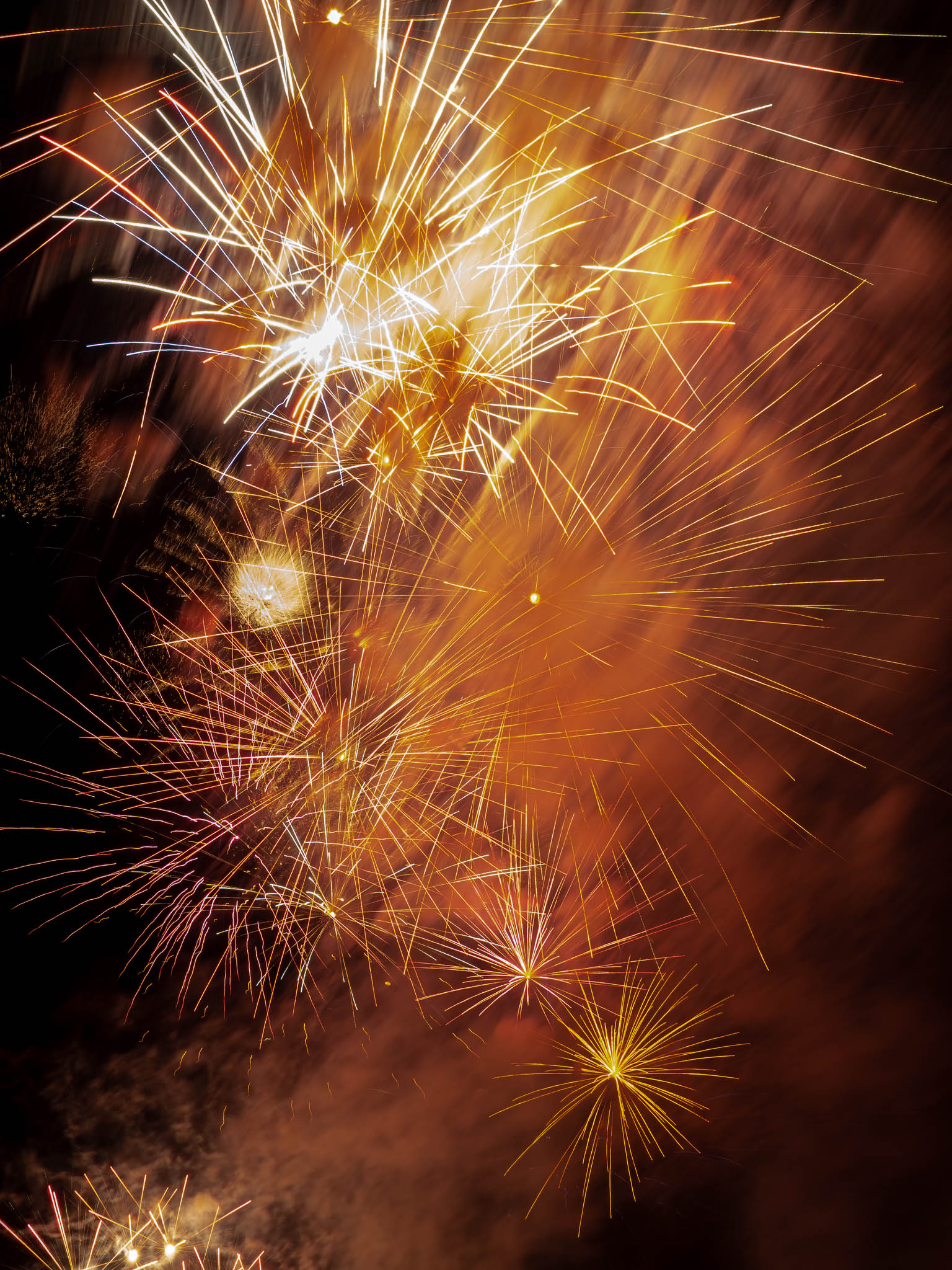 And, after all was done, there was the smoke. 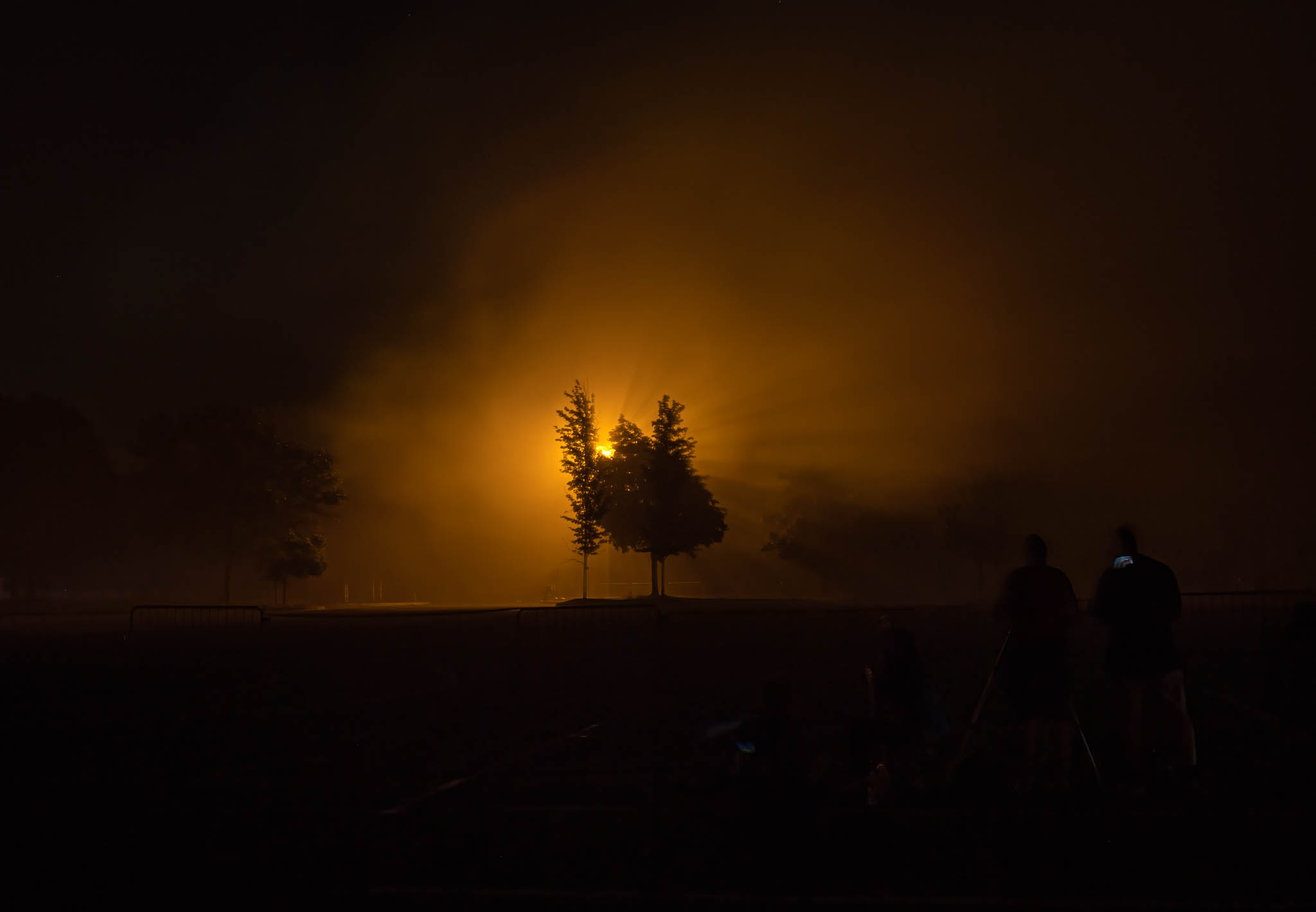