Capture Your Moment Getting the Shot Photography Technical TechniqueNovember 10, 2018

Summer in Arizona. Hot, painfully so at times. Every year I am amazed how hot it gets here. Yet every year, I am excited for summer. Why on Earth would one be excited about summer, you ask? One word. MONSOON.

Every since I moved here from New Hampshire, I have been amazed at the monsoon storms that roll through the valley. The first year, I was caught off guard. The second year, I was prepared and went out shooting my first lightning storms. That was all it took. After that first year, I was hooked and fell in love with shooting lightning. It is a passion that has remained with me to this day, and will never go away.

When I first started shooting lightning, I was using my 35mm film camera (yes, I know, FILM!) and while I was happy to be getting some strikes, I was not satisfied with the quality. My only other camera at the time was a 4×5 view camera, which is virtually impossible to shoot lightning with, not to mention VERY expensive. I invested in a medium format camera and the rest is history. I had large negatives (actually, transparencies) and it was roll film. I was off and running, setting up wherever I could to get lightning on film.

When I first started shooting lightning, I was not as respectful of the power of lightning as I should have been. I got lucky to have never had a close call. I used to go out in the middle of an open field with 3 (yes, 3) cameras and 3 tripods and just set up to start shooting. I did not take any precautions of being in a safe place to shoot and just relied on watching the storms to see where they were headed. My husband came out with me and was in charge of telling me if he thought the storms were getting too close. Problem is, if you are hearing the thunder, it is close enough to get to you. 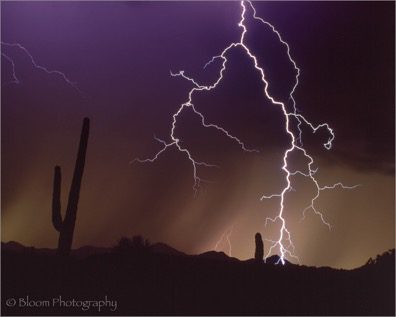 The rule of figuring out how close the lightning strike is to your location is to start counting seconds after you see the strike. 5 seconds equals a mile (roughly) in distance (3 seconds per kilometer). There have been strikes I had that were less than a second from flash to bang (the image above was less than a second). That’s close. Lightning can travel up to 20 miles, so unless you are counting 100 seconds (almost 2 minutes), you are in the danger zone.

The safest place to be when out shooting lightning is in a car with the windows rolled up. If you want to be out in a place where you get some really great foregrounds and out of the city lights, plan on having a 4 wheel drive vehicle that you can sit in when you camera is doing the work you want it to be doing. Cameras are replaceable. Lives not so much. I think about some of the situations I have been in and shudder a bit.

Once you have the safety thing worked out, the fun of shooting a great storm starts. To me, there is almost nothing more satisfying than capturing that moment in time when a lightning bolt strikes the ground in front of you. It is even more satisfying when you have a great foreground and the lightning cooperates and does something cool with your foreground. 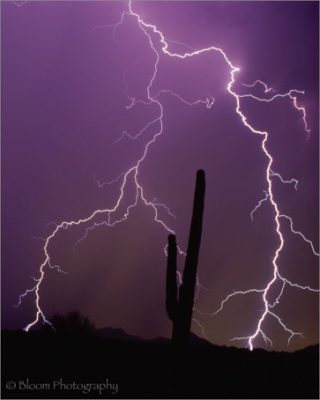 People often ask me how I got the shots I did. Did I use a lightning trigger (no), was I just really fast on the shutter (no), did I get lightning every time I opened the shutter (most certainly no). Truth is I set up my cameras, pointed them in the direction of the storms and opening the shutter. I used the “T” setting on my medium format cameras, which meant the first time I hit the shutter release, the shutter opened. It didn’t close until I hit it again. That allowed me to do very long exposures and get the best chance to capture a strike. That said I wasted a LOT of film. I was successful in capturing a strike about 1 out of 10 or 15 shots. 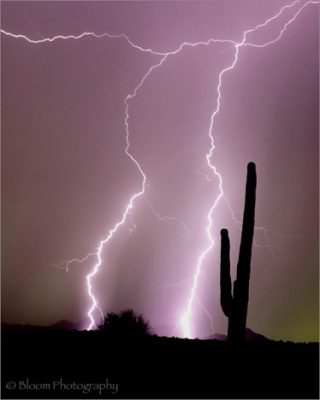 The introduction and improvements in digital over the years has made a bit of a change to the technique of shooting lightning. Lightning triggers have also improved dramatically and work very well now. You can still shoot on a bulb setting and wait for a strike, but that is not the best way to shoot in the summer. When you leave your shutter open too long, it heats up. That is not good for your image. Color noise is a result of long exposures (especially in the summer here) and it is not advisable to leave your shutter open more than about 30 seconds. The good news is you can continually shoot 30 second intervals continuously with a locking cable release on most cameras these days. With improvements in equipment, getting images of lightning is easier than ever before.

There are a few recommendations I always make when talking about shooting lightning. First, and most important to me, is FOREGROUND. Sure, it is cool to capture a lightning strike, but if there is nothing else of interest in the image, it will just be a flash of lightning (with some exceptions, like the image below). Make sure you find something that will be able to add interest to the image. Second, be sure that the point of interest is going to look OK with wind. Storms almost ALWAYS come with wind, sometimes lots of it! Ocotillos are really cool cacti, but they look terrible with wind. Third, be prepared. Really. You may very well have to grab all of your equipment and bug out quickly.

The image below was made when I was being stupid. The storm was  traveling south to north (I was facing east) when it took a sharp turn west. I was not expecting it, but the wind shifted quickly and my husband and I found ourselves having to pack up QUICK to leave. I had 3 cameras to pack up, so I left one going as I was packing the other 2 up. The result was the below image. As I ran back to my car to load everything in the trunk to leave, I realized I had left my keys on the desert floor. Not smart, but like I said, I was being dumb and have since learned. I ran back to find my keys (thankfully I knew where I had left them) and we got int he car just as the rain started pouring on us. Lucky once again. Now I go out with plenty of plastic to cover my cameras, and I never venture more than a few feet from the safety of the car. It is simply not worth losing your life. Even for THE shot. Ever. 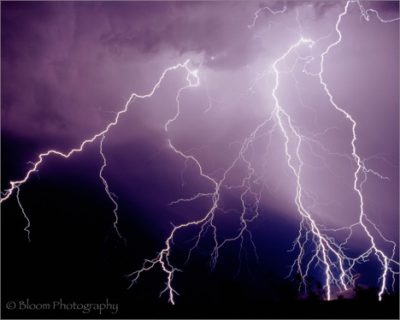 Shooting lightning is a lot of fun. It can be very exciting and rewarding. It also needs to be something you do with the utmost safety and respect for what you are shooting. There will never be a shot that is good enough to lose your life over.