I met Jason Kostal a couple years ago at a concert at the MIM Music Theater. He’s a local Luthier – and a really good one. 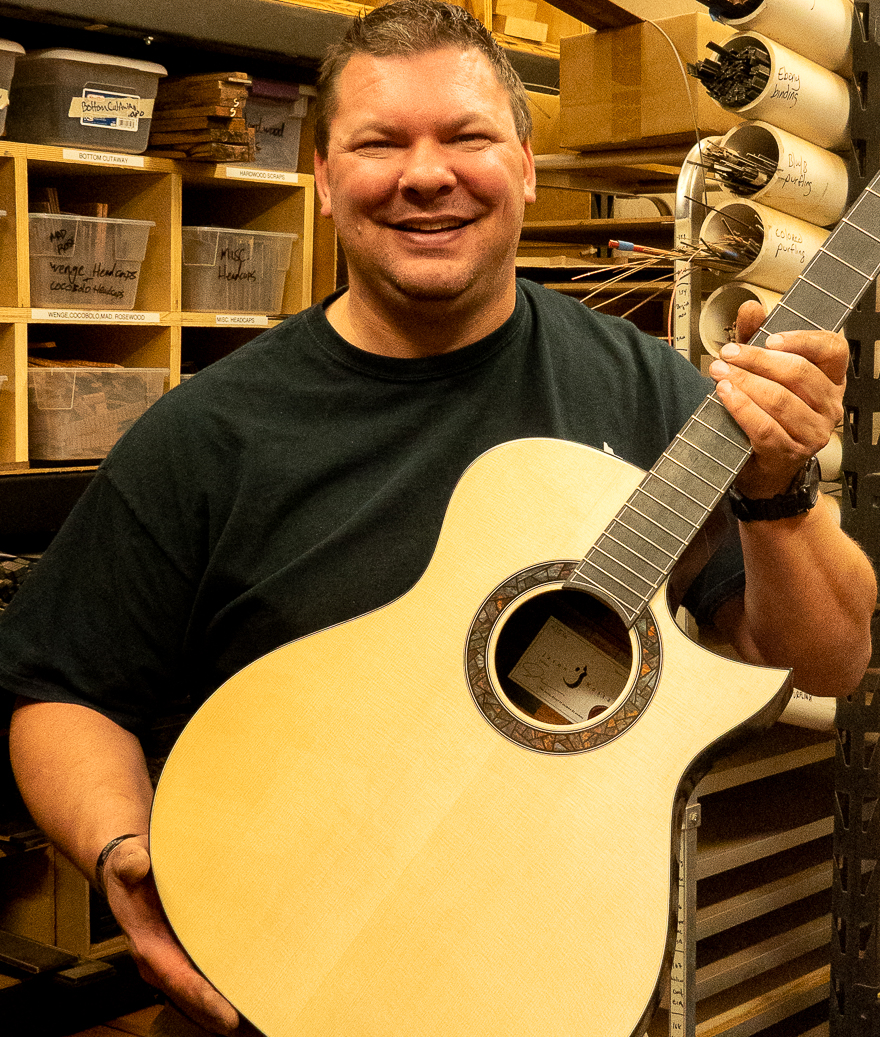 I finally got to see his shop and learn a bit about how he makes these amazing guitars. Jason was first introduced to guitar making by Kent Everett of Everett Guitars; then studied at the Roberto Venn school in Phoenix – becoming an assistant instructor while there; he capped is formal training with a 30 month apprenticeship with Ervin Somogyi in California, after which he returned to Arizona to open his shop in Queen Creek. He’s been doing this for 14 years now and works out of his 2,000 sf basement shop. Check out his website at www.kostalguitars.comfor his complete story.

When a prospective customer wants to order a custom handmade guitar, Jason works with them on the specifics of what they want or require. In most cases they desire certain tonal qualities. In some cases they want a high end custom guitar with specific features, electric inputs, woods, inlays and can afford to pay for them. His customers come from all over the world, most are musicians but a few are just collectors of fine guitars – like art work.

Jason uses woods such as Koa, Cambodian Rosewood, Quilted Maple, Spruce and even has some rare Honduran Mahogany that comes from a single tree, known as “The Tree”, found in 1965 in a dense forest in Honduras,  that was 13’ in diameter and 187’ tall (there’s quite a story about this tree).

He cuts these woods into basic shapes and dimensions and organizes them into sides, braces, tops, backs, necks and fronts. 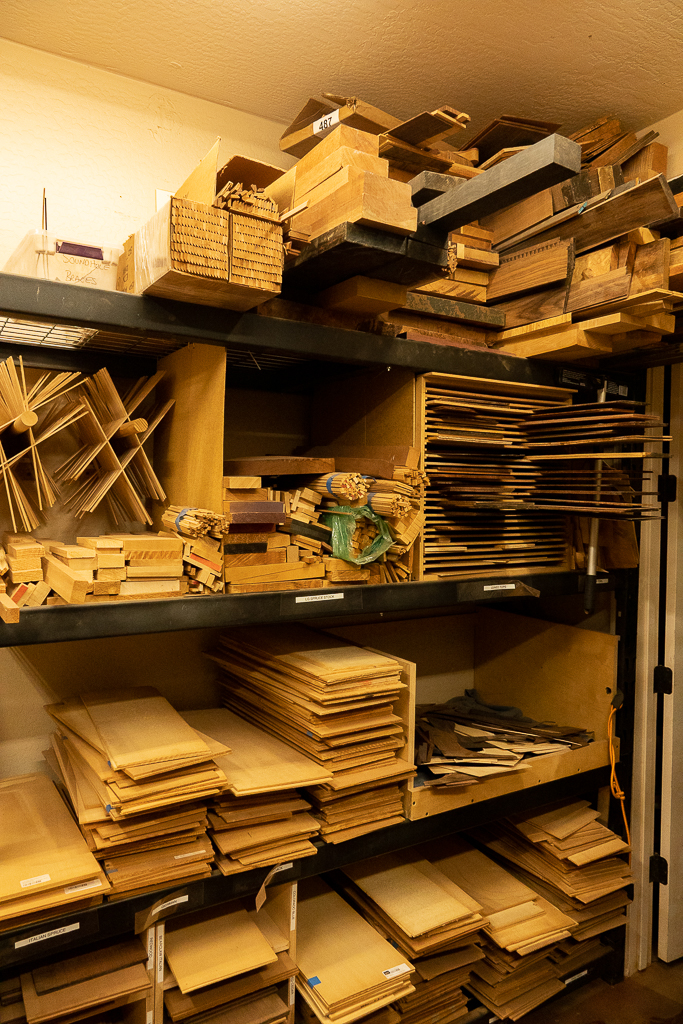 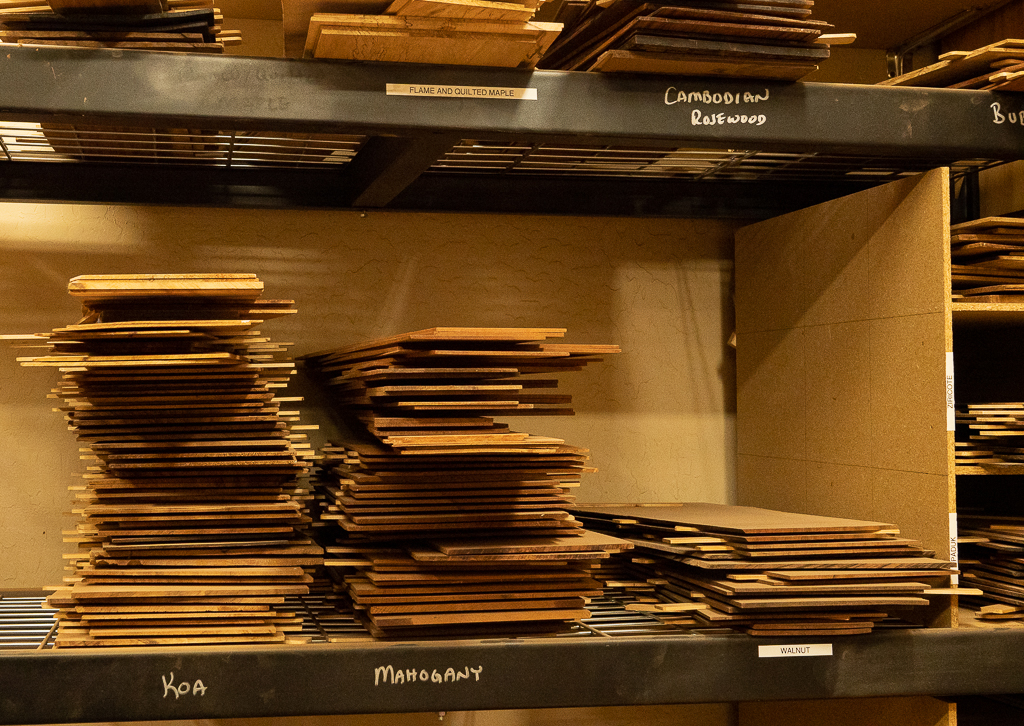 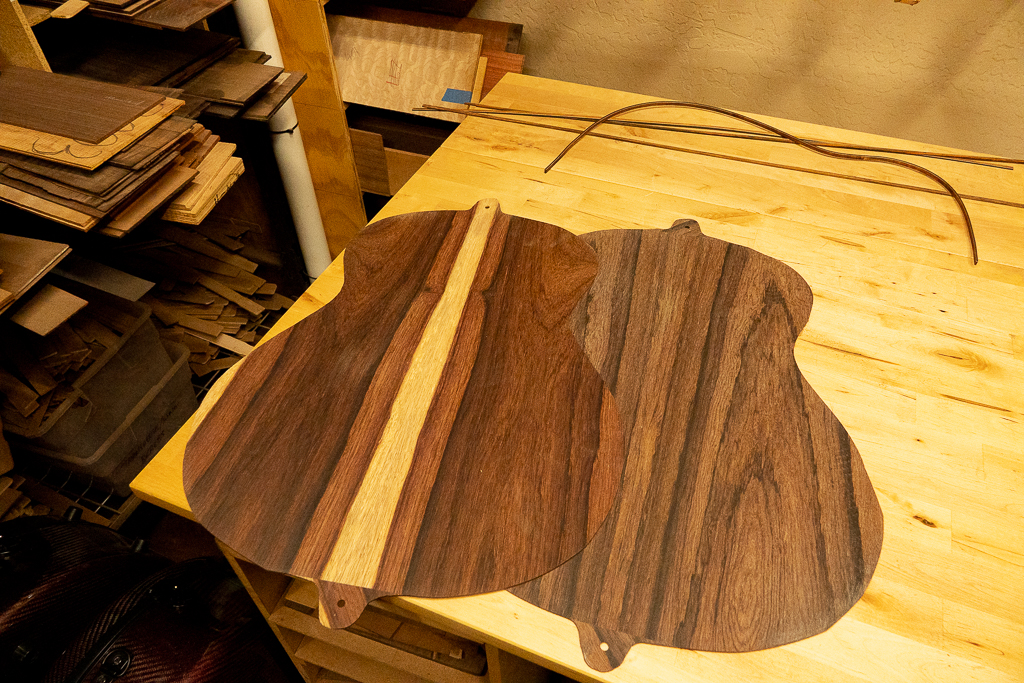 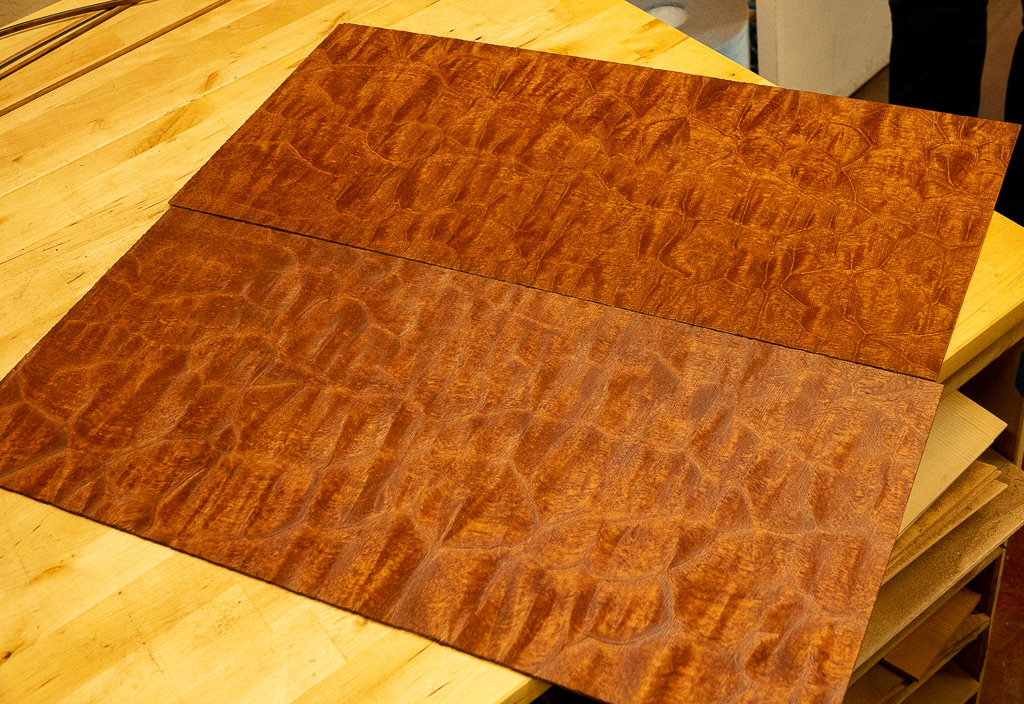 His shop includes a lot of equipment – saws, routers, side benders and a huge assortment of hand tools; including some very expensive, handmade chisels from a master tool maker in Japan (a former master samurai sword maker in WW2) named Akio Tasai who learned from his father. Doing a lot of work by hand allows him a tactile response to the woods. 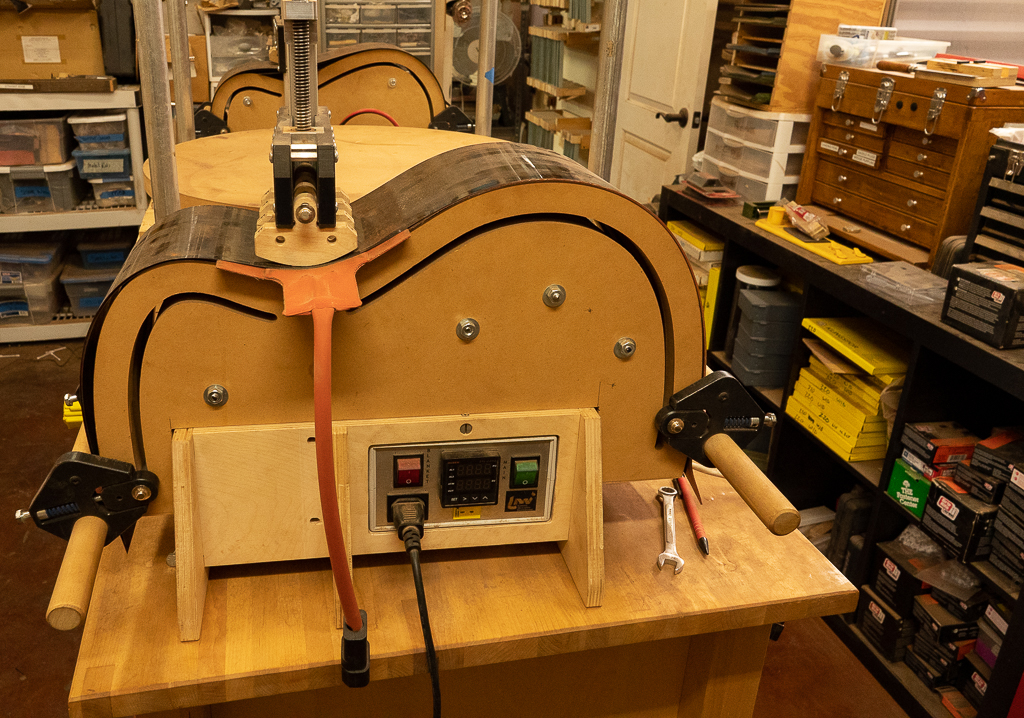 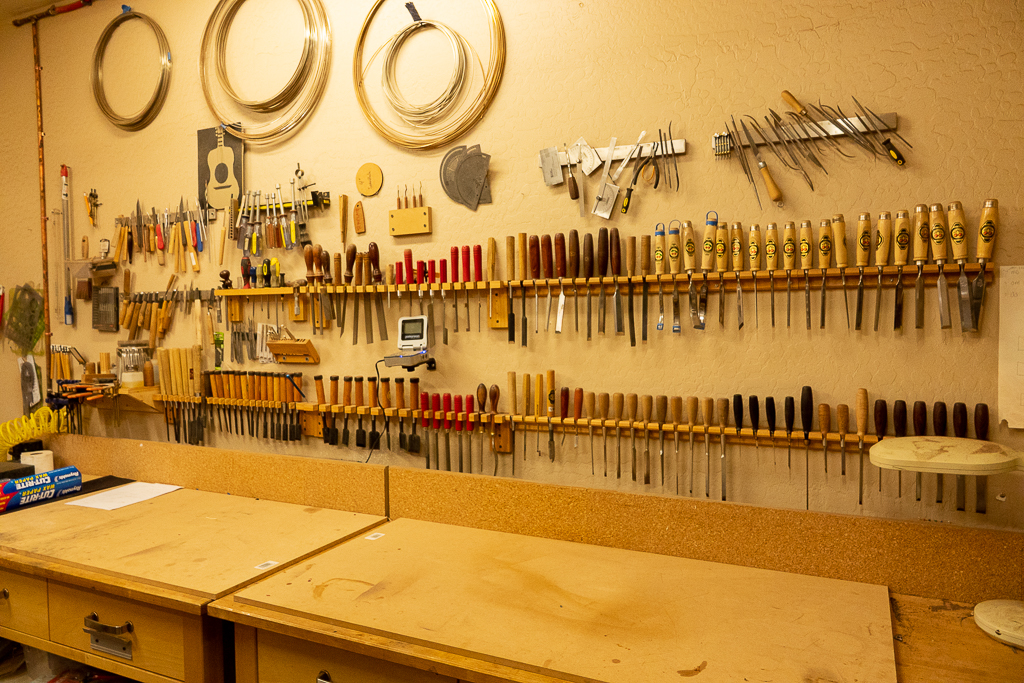 Jason has a couple dozen projects going at any given time. His projects take an average of four months to complete once started, however, he has a 6 year wait list! 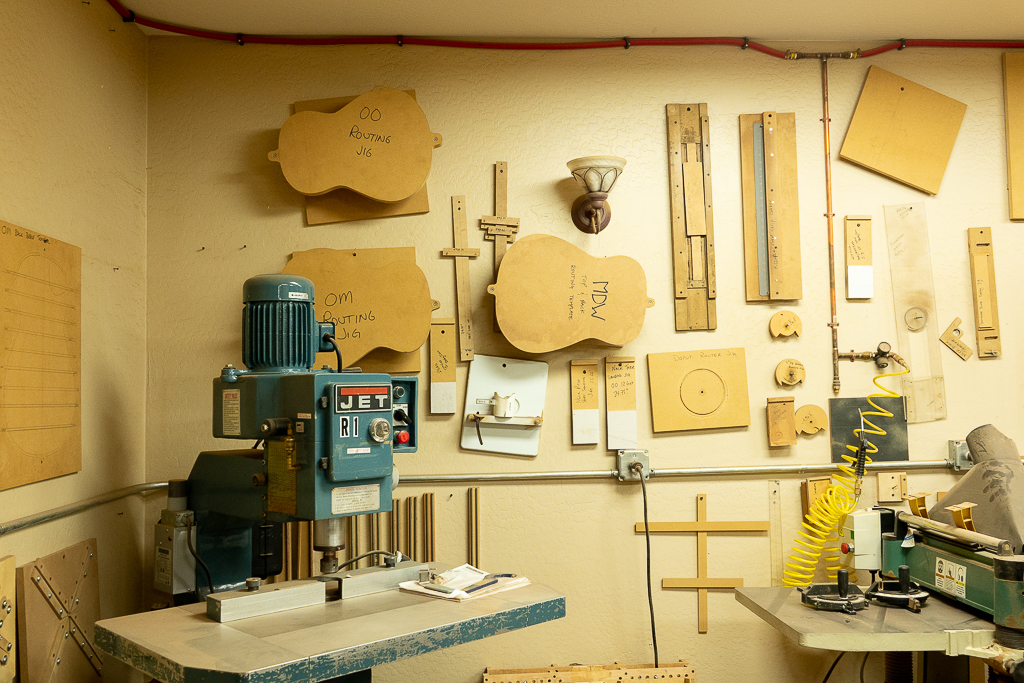